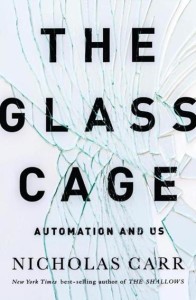 Consideration of how a product makes a person is a critical part of what user experience can bring to a project; however, Nicholas Carr’s The Glass Cage offered a source of insight into some surprising results of a recent set of interviews.

Staff members historically were tasked with planning a complex event. It involved many different people, diverse needs, rigid time structures, and with so many moving parts, the actual day of the event was fraught with stressors galore. The time that went into planning these events; the stress they caused; and the need for the participants to have a good outcome caused the business to identify it as a place where we could help people.

Automation of the arrangement [taking all the variables into account], was identified early on as a potential solution to the needs we clearly heard and identified during the research portion. However, when we tested it, the automation functionality was viewed with skepticism and alarm. Some other factor seemed at play behind the reactions.

…and now the People

During our interviews, we consistently heard how “proud,” users were of coordinating such an elaborate event. Many identified it as one of the most important functions they performed. This event required creativity, agility, and quick thinking. Our users may have found it frustrating, but probing deeper, they also found this task to be a core part of their identity at work. This was what they did, and pulling it off gave them great satisfaction. Our initial designs concepts would have certainly saved them time, but at what cost? The cost was human.

This is the tension posed by automation, and the tension that Nicholas Carr elucidates in his book.

Carr points out the tension of airline security vs. the role of pilots. Most planes can be safely flown with nearly no interaction from the pilot. During this period of increased automation, Pilots have self-reported decreases in their skill-sets (page 64); however the cost of this has been great in terms of the human and emotional.

“But pilots’ self interest, when it comes to matters of automation, goes deeper than employment security and pay, or even their own safety. Every technological advance alters the work they do and the role they play, and that in turn changes how they view themselves and how others see them…Am I the master of the machine or its servant? Am I an agent, or an object” [page 65]

Certainly in the realm of air travel, automation has made things safer and more efficient. The intention isn’t to be a Luddite, and suggest that progress, change, and efficiencies are not important things to work for. The lesson flying has for us as practitioners of user experience is to consider the ways that [especially when designing business applications] that work/self worth are internalized in the execution of a task or the use of a tool.

Certainly Human-Factors studies have long advocated for designing from a user’s capabilities outward (page 167), such as game designers have (page 181-2) whereby a program can develop a user’s skill in a certain area by operating at the periphery of their ability. The program challenges them to think, and we gain by developing a skilled, motivated and most importantly (especially for airlines) engaged user.

In short, taking the lessons and cautions from the research we were able to design an experience which combined elements of game-thinking while challenging them to think creatively  about how to plan out the day. The interface is easy to use “out of the box,” supporting a novice user in rapidly putting together a schedule by surfacing the right information; however, we left the user in control of the ultimate schedule of events.

The business was able to see efficiencies in terms of a reduction of a time planning these events; common event day stressors can be handled manually or automatically depending on the user’s real life proficiencies in solving these challenges. We managed a tool which let the user remain in control of the machine; while allowing the machine to reduce the cognitive load during critical junctures in executing these events.